First swim in an ocean – a very cold one (Portstewart)

Generally speaking, we are all about seeking new experiences.  That’s kind of the point of this family adventure thing. But getting out of Belfast during rush hour (which felt like trying to draw perfect circles with my left hand) without having our first European car accident was a huge win.  I’ll pass on that particular experience.

Those few hours (mostly on the left side of the road) between Belfast and our Airbnb in Portstewart were harrowing.  Fortunately, the Irish sell beer in their grocery stores. A good meal and a few pints later, I was back in the game.  Not exactly excited at the prospect of driving again the next day, but certainly anxious to get out there and see what the north had to offer.

Still, we opted for a slow start.  After sharing rooms in Iceland and the dormroom in Dublin where all six of us bunked together, this airbnb was a townhouse with FIVE bedrooms.  The luxury. The opulence! Every kid had his own room for five whole nights. Oh, the excitement.

I didn’t think it would happen so fast, but already our perspective on necessity, comfort, and luxury is being reframed.  This airbnb wasn’t even ¼ the size of the house we built a few years ago, but we felt like we were going to live like royalty for a few days.

This shift in mindset makes Linds and I happy on several levels.  Big houses are expensive to buy and maintain. Thinking about settling down again someday, if we can be genuinely happy in a smaller house, it would make our financial picture rosier.  But a small house is also just easier. Easier to repair, easier to clean, easier to tidy. And less space to fill = less temptation to fill it. Small houses support minimalism and all of its benefits.

Anyway, I digress.  But these are the things we think and talk about.

View through the beech trees at Dark Hedges.

We did eventually hit the Irish roads after lunch the next day and drove east along the Coastal Causeway.  Only 15 minutes away, our first stop was Dunluce Castle, . This medieval collection of stone walls and windows and staircases is perched on an elevated outcropping overlooking the Atlantic ocean.  Cliffs on all sides, you reach the castle by bridge.

The effort it must have taken to construct this complex is mind-boggling.  Even though it was raining, we had a lot of fun exploring every corner of the castle.  Given its location, you can understand how amazing the drone shots were going to be. I got away from the crowds, waited for a break in the rain, then unbundled the drone and sent it up.

That didn’t last long.  I got two measly clips before two security guards materialized to inform me that I was breaking UK law by flying the drone within 50m of other people.  Crap, I had broken the cardinal rule of drone flying and not checked the regulations first. I summoned my inner Canadian and apologized. They reiterated that I had broken the Law (capital L).  Owen and Jake were afraid I was going to Irish prison. I apologized more, assuring them it was going away and not coming back out. They looked at me like I had just given them skunky Guinness and walked away.  Phew.

A mere twenty-five minutes further east along the twisty-turny, but much more simple to navigate, roads of the coast brought us to The Giant’s Causeway.  This was the impetus for choosing Northern Ireland over the south, it was so highly recommended by several people we know.

Even with the grey clouds and bustling crowds, this natural phenomenon did not disappoint.  It is truly spectacular. How could natural processes lead to such shapes and structures? People have been wondering this for ages, which is why the mythology of the place is also so fascinating.  Fortunately, we have Owen who did some research and created a blog post of his own about it HERE (there is also one by Jake on Magpies).

The sights of Northern Ireland were awesome in the true sense of the word.  The popular stops on the Coastal Causeway route like Dunluce Castle, Giant’s Causeway, Dark Hedges, Carrick-a-rede bridge were all wonders we won’t soon forget.  Even our little town of Portstewart with it’s boardwalk around the seashore, huge sand beach (the “strand”), and giant sand dunes was a pleasure to explore.

Eli on the double-decker bus in Dublin.

After five days there, we packed our things and departed for Belfast.  This time the driving was better. Rental car returned, we walked to our airbnb which was a Titanic-themed townhouse just a few hundred yards from where the ship was built over a hundred years ago.

This was very exciting for Eli who has a little obsession with The Unsinkable Ship, as there was memorabilia everywhere.  Aside from reading Titanic books, we also found a local park to play at and get a workout in. Alas, we weren’t too interested in much else that Belfast had to offer, so after two nights we weren’t sad to pack up and travel the three hours down to Dublin Airport for our flight out of the country.

Two nights in Belfast.  That was the plan. Right?

We got to the airport early and tried to check in.

“Check in is not yet available for this flight,” is what the machine said.  OK. So we found a patch of cold hard floor to relax and wait a while.

After a while, lacking anything else important to do, Linds flipped through our documents (like any good traveler should do on a regular basis, it turns out) and says, “Um, this is interesting . . . What day is it?”

“Why does it say the 9th on here?”  She was looking at our boarding passes.

Simple question.  It’s the answer that really sucks.  We were a day early from our flight – and three hours away from our accommodation.  Oh geez.

If there was a silver lining, it was that the airport had free wifi and we were able to find a place on booking.com in downtown Dublin for “only” 200 euros ($300 CDN).  I cringed at the extra expense but we laughed it off and made a list of all the ways it could have been worse.

It was not the middle of the night.

We were a day early, not a day late.

We still found a place to sleep.

We didn’t get robbed.

We didn’t lose a child.

Better this than a gastro.

Linds took us out for a great pub meal that night.  Our accommodation even had Netflix, which was a special treat for the kids.  And we made it to our flight the next day mostly without incident.

And so ended our time in Ireland.  It was awesome.  We’d go back in a heartbeat. 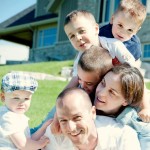